Young G is dope upcoming MC coming out of Fillmore District of San Francisco. He has a slew of material that can be found on his Soundcloud, and has just recently premiered his latest and greatest titled “Trenches”. Make sure to read up on the YOUNG TALENT, as he is only 16 years young, and already a bright future ahead of himself!

Young G: I go by the name of Young G. I came up with that name after having a conversation with my big brother  Lamont an he was basically telling me it was time for me to elevate my game and he wasn’t to fond of my previous name “Young King Lg” I really wasn’t either so i came up wit Young G and thats how that happened.

Young G: My big brother had a HUGE influence on me he. He had been doing music since he was my age so when he came from the south to visit me he would always be doing something on his laptop music related, and shit one day i asked him could we do a song and he said yeah I really didn’t expect him to say yeah. So moral of the story we wrote a song called “The Block Is Hot” and every since then I fell in love with this music.

Young G: I was in a music program called “Project Level” they had me in the studio and doing shows, shit like that it was a great experience and helped me a lot but due to miscommunication I ended up leaving the program and choosing my own lane.

Young G: I’m From San Francisco CA, Fillmore to be exact and honestly its them trenches and its always been them trenches its normal to me I’m just adapted to it so its really no pressure.

Young G: I rap about how i’m livin’, how focused I am, how the struggle made me, and I have a few tracks for the ladies as well ya feel me lol but I really rap about it all I’m still crafting and still finding myself in the music. I’m only 16 aint no limit to this shit.

Young G: My last full release that I still listen to is “Youngin N Charge”, you can find that on youtube and Im gonna re-upload it to Spinrilla soon so it can be easier for people to get to. I also have a Soundcloud page where everyone can listen to most of my music.

Young G: I’m working on Trenches as we speak im working my ass off I want this tape to be the one that gets me the buzz I need around the city. 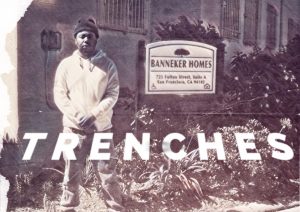 Young G: No visual out right now at the moment, but thats the focus after I drop a few singles.

Young G: I wanna be remembered in this rap game. I wanna leave my mark and money stacked all the way out the atmosphere if possible. I gotta get my family out them trenches.. ya’ll feel me? Definitely wanna be VERY WEALTHY!