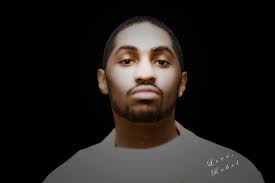 The Cleveland, OH native, Nova the Rebel is definitely creating a lane for himself as well as garnering attention from a few heavy hitters in the music industry. In 2011, he and his publicist founded the imprint, Novastar Music Group LLC. In January 2013, Nova the Rebel inked an album deal with Tri- Entertainment Group, LLC (an indie label out of Cleveland, OH) with world-wide distribution via Warner Music Group. Nova the Rebel’s album will be released this Fall 2013 with his lead single dropping June 25, 2013! His debut album will maintain to be from his team of producers; Max Beats, Elo the Source, The Vette Boyz and Grammy nominated super producer BpZy aka Baby Paul who has worked with hip-hop greats such as AZ, Fat Joe, Big Pun and NaS just to name a few.
ABM – How did you get your Hip Hop name?

First and foremost I wanna say thank you for this interview, I appreciate the opportunity.

I took the “Nova” from the Final Fantasy 7 game and the “Rebel” is just a part of my personality. I took them both and incorporated them together and there you have Nova the Rebel.

ABM – Tell us about your background-where you’re from, what kind of music you listen to, your favorite artists, who your influences are, etc.

I listen to all kinds of music; mostly early 90s Hip-Hop. My favorite artists are Nas, 2pac, Biggie, Andre 3000 and Eminem. My influences aside from my brothers doing Hip-Hop back in the day is anyone who was popuar in the late 80s early 90s.

ABM – What made you pursue a career in music?

It was something that I could actually do and it was a way for me to always express myself.

ABM – What have you been working on lately?

I just finished my album and I’ve been doing a promo run i.e. shows, interviews, etc for the lead single which is “All in My Business”.

ABM – Whats a hot new single your on, and who produced it?

The new hot single is “All in My Business” and it’s produced by Tez Beats.

ABM – Tell us about your mixtape?

I have 7 mixtapes out already and I felt it was time for me to put out an album. The album is different, It talks about my rise to becoming what I’ve become and still growing. It talks alot about my past and my road through music, It’s very versatile and passionate. All-around, alot of stories to tell based on my lifes experiences. It’s being distributed by Warner Music Group so it’ll be available digitally as well as in stores.

ABM – Do you have any new hot songs or features that the public should know about?

The new hot single is “All in My Business” which is very much a statement record. It touches on the everyday struggle of dealing with people who are unnecessarily nosey. We all have dealt with people wanting to know what our finances are like, who we spend our personal time with, who we hang out with and etc.

ABM – Who are some of the artists you have worked with?

In my earlier mixtapes, I worked with more underground artists from Cleveland. In my latest mixtapes I kept it just me. In this debut album, I did absolutely no features. I’m putting it all on the line not only giving you a piece of me.. I’m giving you all of me.

ABM – What is one of the bigger achievements of your career, in your eyes?

Performing at some of the biggest festivals in the country; NXNE as well A3C. Also, me being on billboard.com was/is probably the biggest thing for now.

ABM – Where can people find you?

Stay humble, stay true and stay original. If you’re an artist, remember to learn the business side of the business. I wanna thank all of my supporters and don’t forget to cop the single “All in My Business” which is available now on iTunes. The album is coming out this Fall!