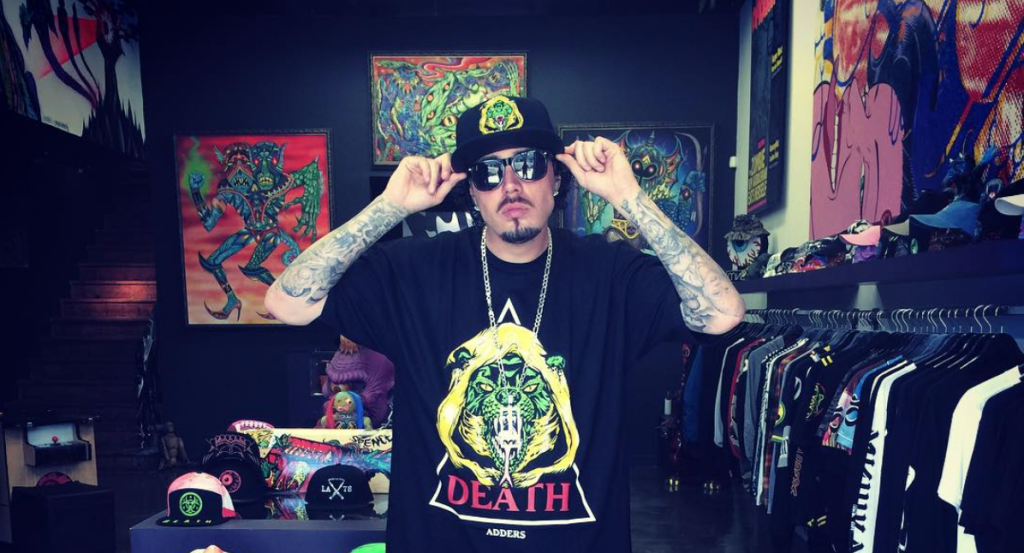 All Bay Music Interview with Mars

ABM: How did you stage name come about?

People always think my name is some spacey type name or have some deeper meaning. But really, my name is Mario. I think it was my best friend Jason who started rapping with me when we were kids who called me that first. It just stuck.

ABM: What’s the most recent single you released?

I’m about to drop a new single this quarter called “Creatures Of The Night” featuring Tech N9ne and Twiztid with Lisa Leuschner from American Idol on the hook through my favorite clothing company Mishka. The Chris Paxton remix of the song features my label mate Kung Fu Vampire and his band. I took about a year off from music so I figured if I was going to step back in and do shit, I was going to come out swinging. There’s so much cool shit in the works right now. This is definitely going to help the momentum..

You know as a horrorcore artist I like putting a lot of my worst thoughts and moods into my songs. Real life shit mixed in with the worst things possible. Thats what my fans expect. A lot of my music is about weird shit like suicide, murder, all that kind of stuff. I think at some points of your life when all things are so bad, these thoughts cross your mind. Have you ever been so pissed off at somebody you just want to kill them? The what if I… You sit and you day dream about what you would do if you might see them. The details of that would be a horrorcore song. Other times I just hear a beat and the song writes itself. I think the more I don’t record, the more inspired I get when that feeling comes on to get into the studio. Subconsciously you have all this built up stress, you catch patterns from music you’ve may have heard somewhere, and it comes out at the right times. I like to use the shit going on in my life as a driving force to vent into music.

ABM: How long have you been making music?

I’ve been making music for what? 17 years? Its always been dark. It’s always been on some other shit. I never tried to follow anyone’s lane out here. NEver got into fads like the hyphy shit, or what was cool at the time. Even trap beats these days. This whole time I just wanted to do exactly what I’m doing now. It worked.

Dude. I’m 35 years old. I love Kayrhee, TC and The Enhancer, Ant Banks, Sean T. There’s so many from that era that had a sound that not too many people make anymore. Lucky for me, most of those names were the first people I ever got beats from or recorded in a studio with very early on in my career.

ABM: Who do you want to work with in the future?

You know, after all these years I’ve hung out with, did shows with, had over to my house or what ever, and I still havent did songs with Brotha Lynch Hung and Esham. I really don’t have the desire to work with many artists any more because I like to just make music for myself, but I swear to god, I’m going to get both of them on the same track one day with me. Just because everyone has been waiting for them to get together. They both have told me that I’m probably one of the only people who can make it happen. Its jsut getting one of them to lay something down first. That’s a bucket list addition.

ABM: Where can we hear your music?

I’m distributed through Empire Distribution  so they got me everywhere. iTunes, Apple Music, Amazon, Beats Music, Rhapsody, Spotify, just anywhere you can get music digitally. But this holiday season look out for my new single to hit Mishkanyc.com and grab yourself a hard copy. They will go pretty fast because were making it a limited edition release.

Catch me on Instagram.com/Mars or Twitter.com/Mars pretty much everything is @mars or /mars all across the board on social media. Except Facebook. The Mars candy corporation screwed me on that one. So you can find me at facebook.com/madinsanity

ABM: Anyone you want to shout out?

You know I mostly want to bring light to my genre. Halloween is always the time to make sure we get our due. Shout out to artists like Scum, Dark Half, King Gordy, Insane Clown Posse, Twiztid and the staff at MNE, Blaze, Boondox, Anybody Killa, Brotha Lynch Hung, Mr. Grey and the Damn Dirty Apes, OMN, The Flatlinerz, LIquid Assassin, Insane Poetry, Koshir, Daniel Jordan, V-Town, ADR Lavey, and of course Kung Fu Vampire and everyone involved with Mad Insanity Records. But to the Bay Area. I’ve been rocking it on TV, in magazines, across the world on stage. But I always repped home. Pittsburg, CA. I make horrorcore music, but I’m a Bay Area artist first. So shout out to everyone from Antioch and Pittsburg. I’m doing it for y’all.