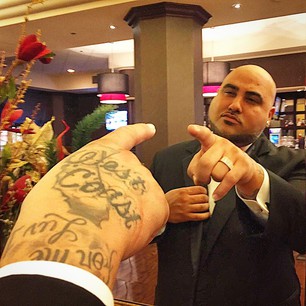 Born in the Bay Area, Livin Proof is a rap / hip hop artist, song writer, and producer. He is from Hayward, California, and was raised there and in Modesto, California. This is why in his music you always hear him say “Valley to the Bay Shit.”

His first commercial album titled “Relevant” was launched in April of 2011 which features artists such as The Jacka, San Quinn, Philthy Rich, Beeda Weeda, Shady Nate, and more. On that project he released 3 commercial music videos from Relevant, “Reppin My Name,” “Get it in,” and “I Got To Come Up”.

He has also released “The Cleaners” Street Tape featuring P. Ocean in 2011, as well as “Fresh” The Street Tape, and “Serious Bizness” in 2012.

Livin Proof has performed nationwide, and has shared stages with artists such as Too Short, Pitbull, Mario, and Crime Mob to name a few.

As a Producer, he is responsible for many Bay Area artists hit tracks, including Philthy Rich’s “I Represent It”, Beeda Weeda’s “Aint Scarin Nothin”, and many more.

Most recently he has been working on a slew of his label mates upcoming Poe Boy DJ’s DJ Smokeybear Mixtapes, and has gotten Poe Boy music executive ”The Rap Manager” behind the new releases. He recently set up a photo shoot with his artist ResQ, and brought him to the record label to do the photo shoot. He also just dropped a recent video with his artist ResQ titled “Hater”. He was also pivotal in helping The Rap Manager come up with the MIA to the BAY series by DJ Smokeybear, and you can expect to see him on the upcoming “MIA to the BAY” Volume Two, as well as his own DJ Smokeybear Mixtape titled “Earthquakes and Hurricanes”, coming soon!

Look below to see the latest music video, “Keepin It Franklin”, check it out: