The Mekanix – Under The Hood 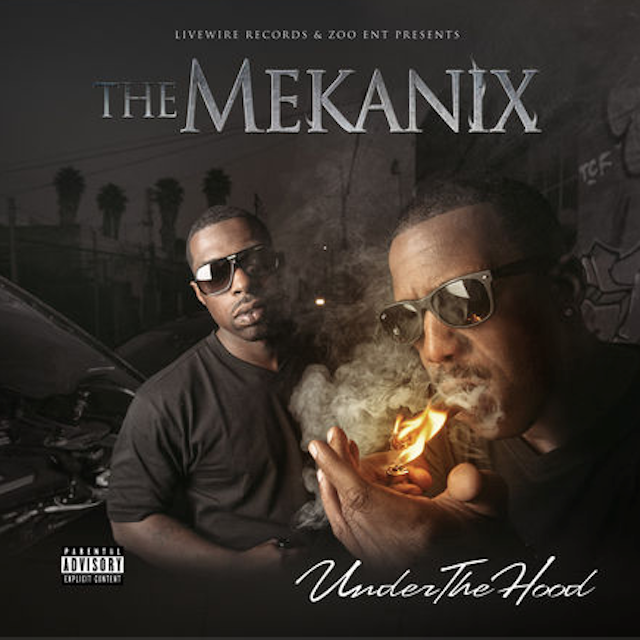 You may not have heard of legendary Bay Area duo The Mekanix, but chances are you’ve heard their music. As two of the Bay Area’s foremost sound architects, 4 rAx and Kenny Tweed have produced thousands of tracks since the early ’90s for nearly every Bay rapper you can name and were instrumental in the rise of J. Stalin, Philthy Rich, Beeda Weeda, the Hittaz on the Payroll & Shady Nate.

Today, The Mekanix announce their next album, Under The Hood, out June 3rd via EMPIRE. Under The Hood follows 2012’s Chop Shop and 2014’s Chop Shop 2 and will feature guest appearances from E-40, Too Short, Richie Rich, The Jacka, C-Bo, J-Stalin, Mistah FAB, Clyde Carson, The Hoodstarz, Beeda Weeda, Trae the Truth, Rass Kass, Nio the Gift, Erk the Jerk, Kool John, Lil Debbie, Lil Blood, The Delinquents, Iamsu, Mozzy, Keak the Sneak, The The Luniz, Shady Nate, Dru Down, B-Legit, Turf Talk, and San Quinn.
4 rAx and Kenny Tweed were first connected to each other by members of The Luniz and Hittaz on the Payroll, getting together to form The Mekanix in the year 2000. Says 4 rAx, “We were both producing on our own and we had an artist we mutually knew. The Hittaz on the Payroll under Numbskull from The Luniz. We had all types of connections, we had mutual friends and family members who knew each other.”  Before he became a producer, 4 rAx DJ’ed for Digital Underground and The Luniz’ tours, while Kenny Tweed built his homemade studio on High Street in Oakland. After joining up as The Mekanix, the duo produced street albums for four years until a young rapper named J. Stalin fell into their laps. Says Tweed, “We signed J. Stalin to us as a production deal, did his first album. We gave him his platform. 2016 marks the 10 year anniversary of his first album On Behalf of the Streets and we produced On Behalf of the Streets 2, coming later this year.” The Mekanix have long been inspired by automobiles and deeply understand the importance of the car to Bay Area Hip-Hop. Says 4 rAx, “I come from a long line of auto mechanics – my father, grandfather, great-grandfather, my uncle they were all mechanics. I feel like we are carrying on their legacy with our production; fixing up people’s music, making it run smoothly. Our beats are the engine for Bay Area Hip-Hop”

Today, The Mekanix release the video for “On My Hustle,” the first video from Under The Hood, featuring IAMSU!, J. Stalin and Keak Da Sneak, as well as a hook from 4 rAx himself. Premiered today by HipHopDX, The slick 4 rAx-directed, Bro Jackson-edited video depicts 4 rAx and Kenny Tweed as beggars, selling their beats for food as the emcees ride the squelching bassline, skittering drums and classic Bay Area synths. Explains 4 rAx, “We hate making stereotypical videos like everyone else. Us dressing up like bums sheds some truth on how the music industry is nowadays for producers, we’re often the bottom rung on the totem pole and the last to get paid. As a producer, I write the hooks, create the beat, mix the song, do everything but the world doesn’t recognize that producers are doing most of the heavy lifting for the song – they just love the rappers. We just wanted to poke fun at the situation with this video. Under The Hood hits stores, streaming services and chop shops on June 3rd.

Pre-order Under The Hood: https://itunes.apple.com/us/album/under-the-hood/id1104044886&app=itunes

Watch “On My Hustle”: https://www.youtube.com/watch?v=BEPYM2DkSX0