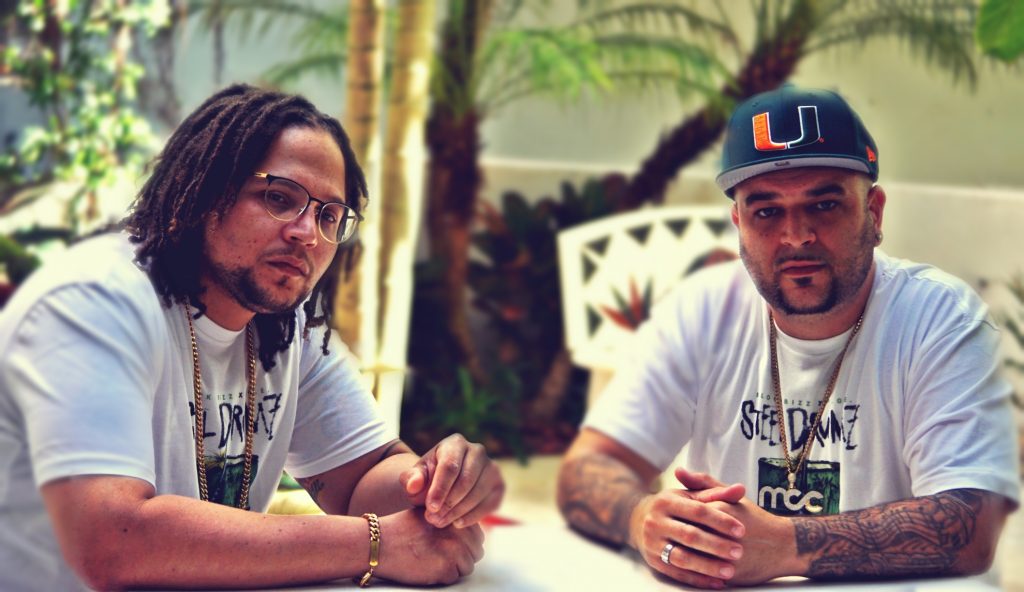 Miami Hip Hop Duo Steeldrumz drop their highly anticipated self titled debut album “Steeldrumz” The Album. Fresh off their trip from New York visiting a nationwide respectable DJ Statik Selektah of Shade 45, there is no denying the freestyles by Resq and Goldenchild Bahamas was a hit.

In the INTRO track Goldenchild gives you the flavor from his Caribbean roots, and has a total Rastafarian island vibe. In the next track “Bag” this duo isolates themselves in a back to back rap style which shows both ResQ and Goldenchild Bahamas show their diversity and rawness proclaiming that their gonna “get to this bag”.

In the next track they put on for the 305 and place Miami’s mixtape king Mike Smiff on the track. The Slip-N-Slide Records drops a smooth hook and verse on some feel good vibes with their track “Deserve That”. This track resonates cause the track is all about celebrating the wins from the mountain of losses. The visual that accompanies this song is pure fire, and available to view via YouTube.

In the next track “Give It 2 U”, the Miami standouts make a record for the beachfront club atmospheres globally. With a blend of electronic music, house, R&B, and Rap both ResQ and Goldenchild Bahamas make a song of pure melodic pressure. The track screams raves and ecstacy throughout the entire track, a total pop hit!

If your a cannabis friendly human the next song “High On U” they show love to their Bay Area ties and drop a vibey R&B/Rap track with a dope hook by McKlezie and they show their love for natures favorite plant. I can hear a superstar remix with Wiz Khalifa and can visualize this as a track with charting potential.

Speaking of the Bay Area, they make sure since they made a nice track giving respect to Northern California’s booming cannabis market, they made sure to enlist a few Bay Area respectables like Yogi Calhoon, Lil Slugg, and Livin Proof.

With “Made It Out”, they hop on a serious west coast slap and they talk about going from rags to riches with Sacramento’s own Yogi Calhoon. The tempo of this album is nothing but pure talent, undeniable hard instrumentals, punchlines with aggressively intact deliveries.

With the next track “Wake It Up”, they do just that. With the South Hayward native Lil Slugg they drop “Wake It Up” on a wacky creative beat with bounce, and all of them show diversity and come according to the track.

On the Livin Proof produced single “Ask YB”, the Modesto native and unofficial third member of Steeldrumz “Livin Proof” drops a clean hook to accompany a scorching beat and together the trio take you back to the beachfront club and take you international.

With production from some of the most eclectic and respected producers in the industry and a obvious ear for good vibes and music, Steeldrumz really does show and prove in so many ways to their home city in the 305 that not only are they a group to respect, but as a duo who takes pride in their craft in ensuring a actual listening experience by fusing so many great genres into one, surely if this group continues dropping projects at this pace, global stardom is actually within reach.

Don’t sleep on Steeldrumz new self titled album, this is a project for people of all ages and walks of life, not many artists today can say that and have it hold truth. Beach Life!