Meek Mill and 50 Cent Beef Gets Real as of YESTERDAY!!! 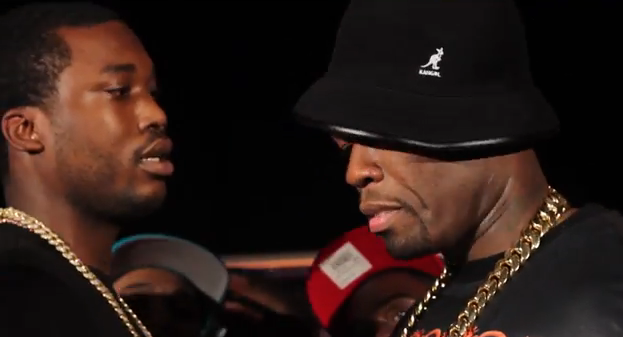 We were expecting Meek Mill to target Drake in his new material, and while that did happen, he saved some of his most ruthless bars for a surprising target — 50 Cent.

While Rick Ross and 50’s beef raged on, Meek remained cool with Fif for some time, but it seems those days are over, as the DreamChasers rapper has come to his MMG boss’s defence on new track, “Gave ‘Em Hope”.

Naturally, it didn’t take long for Fif to respond, and ironically enough, on the same platform Meek criticized him for “poppin’ off” on — Instagram.

“LMAO Hey shit head, your career is over already.you better focus on getting Nikki pregnant so you can at least get child support girl,” 50 wrote, captioning a photo of the famous poop emoji with Meek’s face plastered onto it.

Meek came back pretty quickly, and with quite an extensive roast, writing, “U pop shit on social media 24/7 … U never in the places everybody b at…. The whole queens say you a rat…. Ross baby mom hit you for that check you sick …. Ross finished you “career over? How dare you speak on that? …. All you artist that came under you broke” ya son hate you smfh!”, before criticizing 50’s vodka, his excessive internet use, his frequent attacks on Puff Daddy and Jay Z, and calling him “miserable”.

Later on, he also shared some words for Toronto councillor Norm Kelly, who tweeted out a photo of himself handing Meek an ‘L’. “Norm Kelly hold up…… Young black dude that came from nothing vs old white racist man from Toronto…. I got more money than you already? You took the real “L” in life champ!”.

Check out the posts below.

UPDATE: Unsurprisingly, 50 has continued to post a slew of disparaging Meek Mill memes.