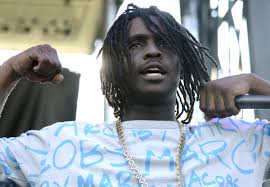 Police in Hammond, Indiana, pulled the plug on Craze Fest while Chief Keef was beaming in his set from a soundstage in Los Angeles. He was just finishing I Don’t Like, and talking about the need to stop violence, when music was turned down, the hologram disappeared and police cleared the stage.

The show, held in a public park and attended by 2,000 people, was planned as a benefit for Chief Keef’s friend Marvin Carr – a rapper known as Capo – and 13-month-old Dillan Harris, who killed on 11 July. Dillan was killed by a vehicle fleeing the scene of a shooting that killed Carr.

Fans at the show told the Chicago Tribune that it had passed without incident before police intervened. “There was no violence. It was the police who did this,” Stefanae Coleman, 17, told the paper. “Everyone was happy … We went through the whole show without any problems. They just waited for Chief Keef, and that’s what irks me. (The police) do this, then they get mad that we’re mad. It’s disrespectful to us.”

Chief Keef had performed by hologram owing to several arrest warrants against him in the neighbouring state of Illinois. However, other cities had refused to allow him to perform by hologram recently. Last weekend, a similar appearance in Chicago was cancelled after the staff of mayor Rahm Emanuel called him “an unacceptable role model” who “promoted violence” and whose presence, even via hologram, “posed a significant safety risk”.

Before his appearance at Craze Fest, Chief Keef teased several different locations , before officially confirming his holographic show at 9pm. Police shut it down at 10.25pm.

Hammond police commander Patrick Vicari told the Chicago Tribune his department had been clear about the consequences of Chief Keef appearing. “We spoke to the promoter several times, and they assured us [Chief Keef] would not be performing,” he said. “Later, an officer working the show realised it was being streamed on one of the hip-hop sites, and promoters were warned again they would be shut down.”

Mr. Jones said he told the police that Chief Keef would not be featured onstage. “No one ever gave me a reason why they didn’t want the hologram to appear,” he said. “They didn’t have a real reason. They believed that it would start trouble, but the first thing Chief Keef said via hologram was: ‘Chicago, we need to stop the violence. Let our kids live.’ ”

“I know nothing about Chief Keef,” Hammond’s mayor, Thomas McDermott, told the New York Times. “All I’d heard was he has a lot of songs about gangs and shooting people – a history that’s anti-cop, pro-gang and pro-drug use. He’s been basically outlawed in Chicago, and we’re not going to let you circumvent Mayor Emanuel by going next door.”

Alki David, chief executive of Hologram USA, which sponsors Chief Keef, said: “Shame on the mayor and police chief of Hammond for shutting down a voice that can create positive change in a community in desperate need. And for taking away money that could have gone to help the victims’ families. This was a legal event and there was no justification to shut it down besides your glaring disregard for the First Amendment right to free speech,” he added. “Mark my words, if you censor us, you only make us stronger.”