Bobbi Kristina Brown has died today at the age of 22 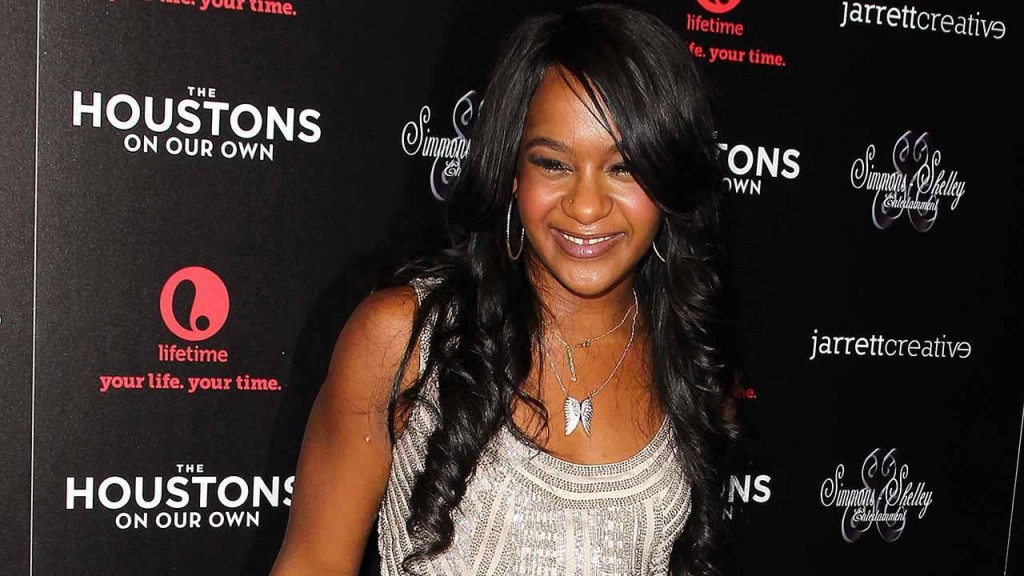 Two days before she was found face-down in the bathtub at her home outside Atlanta in January, it seemed like Bobbi Kristina Brown’s career might have been picking up.

“Let’s start this career up&&moving OUT to TO YOU ALLLL quick shall we !?!???!” she said in an enthusiastic tweet.

It’s not clear what projects she may have been working on, but they won’t be completed now.

Brown, the daughter of late superstar Whitney Houston and singer Bobby Brown, died Sunday at the age of 22, a representative of the Houston family said in a statement.

“Bobbi Kristina Brown passed away Sunday, July, 26 2015, surrounded by her family,” the statement said. “She is finally at peace in the arms of God. We want to again thank everyone for their tremendous amount of love and support during these last few months.”

Brown was placed in a medically induced coma, relatives have said. Rumors flew about her condition, with family members and loved ones taking sides in the drama.

“Meeting with the doctors and understanding that she can live in this condition for a lifetime truly saddens me,” Houston said. “We can only trust in God for a miracle at this time.”

The statement was released days after her father and Whitney Houston’s former husband, R & B singer Bobby Brown, told an audience in Dallas, “I can say today, Bobbi is awake. She’s watching me.”

On June 24, Bobbi Kristina’s aunt, Pat Houston, announced that her niece had been moved to a hospice facility.

“Despite the great medical care at numerous facilities, Bobbi Kristina Brown’s condition has continued to deteriorate,” Houston’s statement said. “As of today, she has been moved into hospice care. We thank everyone for their support and prayers. She is in God’s hands now.”

Many had worried the young woman was haunted by some of the same demons as her mother.

Whitney Houston and Bobby Brown married in 1992 and welcomed Bobbi Kristina in 1993. The little girl was doted upon by both her parents and Houston often brought the youngster on stage.

Houston told Rolling Stone magazine in 1993 that “having Bobbi Kristina … I could never do anything that could top that. There’s been nothing more incredible in my life than having her.”

“God knows, I have been in front of millions and millions of people, and that has been incredible, to feel that give-take thing,” Houston said. “But, man, when I gave birth to her and when they put her in my arms, I thought: ‘This has got to be it. This is the ultimate.’ I haven’t experienced anything greater.”

Mother and daughter grew even closer after Houston’s divorce from Brown in 2007. Houston and Bobbi Kristina performed together on ABC’s “Good Morning America” in 2009, singing “My Love Is Your Love” in Central Park.

After Houston’s death on February 11, 2012 — an accidental drowning in a bathtub, a coroner ruled, with heart disease and cocaine use named as contributing factors — there was a great deal of concern for Brown, who was 18 at the time.

She opened up to Oprah Winfrey during an interview in March 2012 about how she was coping with the loss of her mother.

“No one knows what an amazing spirit she was,” Brown told Winfrey. “She wasn’t only a mother, she was a best friend.”

Brown said her grief came in waves, but that she still communicated with her mom.

“I can hear her voice telling me to keep moving, baby, I gotcha,” she said. “She’s always with me. I can always feel her with me.”

Brown was joined in her grief by Nick Gordon, who was taken in by Houston when he was 12 years old and who was raised alongside Bobbi Kristina.

Gordon and Brown became romantically involved after Houston’s death, and tensions between the Gordon and Houston families over the relationship were part of the storyline on Lifetime’s short-lived reality show “The Houstons: On Our Own.”

There was speculation that Brown may have suffered from some of the same problems as her parents (both Houston and Brown had documented issues with substance abuse) after she appeared to be intoxicated during some scenes of the reality show.

Those concerns intensified in July 2014 after a picture was posted on her Instagram account showing a young woman who looked like Brown appearing to be smoking from a bong. The image had made the media rounds two years earlier.

Brown later denied that she posted the photo and tweeted that it was done by someone attempting to tarnish her image.

Brown and Gordon announced their engagement in 2013 and she took to her Facebook page to clear up the misconception that he was her adopted brother. Far from being bothered by the relationship were she still alive, Brown said her mother had predicted they would fall in love.

“People need to seriously stop judging my relationship,” Brown wrote. “Pretty sure it’s my own decision who I want to be with.”

It was Gordon and a male friend who discovered Brown unconscious in her townhome. While Brown called Gordon her husband (she had tweeted a picture believed to be of their hands wearing wedding rings with the hashtag #HappilyMarried) there is no court record of a marriage between the two and family members say the couple was never legally wed.

Police had been called to Brown’s home January 23 after someone reported a fight there, but no one answered the door and officers found no evidence of an altercation, a Roswell police spokeswoman said.

After Brown was found in the bathtub, authorities launched a criminal investigation. A family friend said police questioned Gordon about the bruising on Brown’s chest and said he told them it was a result of his giving her CPR.

Gordon gave an emotional and sometime explosive interview that aired in March on the “The Dr. Phil Show” in which he complained of being denied access to Brown.

The talk show host persuaded Gordon to enter a treatment program for substance abuse and in April his attorney, Randy Kessler, confirmed Gordon was no longer in rehab.

In June, a civil lawsuit was filed against Gordon in the Superior Court of Fulton County, Georgia, alleging that Gordon’s behavior “caused, among other things, substantial bodily harm to Brown.” It also alleged that since Brown’s hospitalization in January, Gordon accessed her bank accounts and stole more than $11,000. Brown was initially taken to North Fulton Hospital and placed in a medically induced coma, and was later transferred to Emory University Hospital in Atlanta, where she was on life support in the neuro intensive care unit. In March she was moved to a rehabilitation center.

Despite reports of fighting over her care, on June 19 Bobby Brown said the family was working together on behalf of his daughter.

“I am making decisions with (Bobbi Kristina’s aunt) Pat Houston and we are working together for the medical care of my daughter,” Brown said in a statement. “Right now we are focused on Bobbi Kristina’s medical prognosis and the criminal investigation. These are the priorities for us. Whoever had a hand in causing my daughter’s injuries needs to be brought to justice.”

Her death cut short the dreams she had of following in her mother’s footsteps by pursuing a career in music and acting. In 2012 she made her acting debut on Tyler Perry’s TBS show “For Better or Worse.” Perry is a close family friend who frequently visited Brown while she was hospitalized.